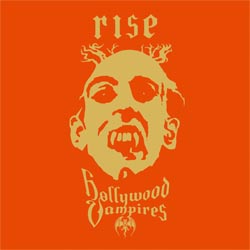 I got to hear this a few hours early so here's what I think after a few listens.

I Want My Now
Everyone has heard this live. The studio version is possibly better.
Everything seems looser then on any AC album for a while which is good. Let's the music breath more. It's a decent song which is elevated by the end section which is just a jam, feeling more than a little like the 'My Stars' outro which can only be a good thing. Kinda has a psychedelic feel.

Good People Are Hard To Find
Just a short atmospheric soundscape with voices that generally you can`t make out. But it works as a good intro to...

Who's Laughing Now
This didn`t do much for me on the first couple of listens but has grown on me. Again a good song. I like the use of both Alice and Depp's voices as they contrast so much. I'm still not keen on how some of the first verse lyrics scan... seems rather awkward. Joe just about gets away with his solo on this one, but I can't help but feel that a different style of lead soloist would fit better on several of the songs on this record. Just me probably. I'm a big fan of Perry's Aerosmith work but with the Vampires he just seems sloppy.

How The Glass Fell
Another nice little bridging piece, this time with a harpsichord effect.

The Boogieman Surprise
I liked this live and it's just as good on record although I thought it would be rather longer then it. Like the synth washes as well, which you couldn't hear live (if they were even there). Again Perry's (I assume) solo is kinda weird, just kinda messy, but it's okay. Maybe they wanted to avoid the traditional flash soloing.

The Wrong Bandage
Another short interlude, which is really nice and atmospheric, going into...

You Can't Put Your Arms Around A Memory
Joe Perry vocals (but you can hear Alice in the background) and the first cover. Unlike many it seems I have never heard Thunder's original so I have no expectations. Might as well be an original. As a song it doesn`t do much for me at all. Pretty run of the mill mid-tempo Americana. It's not bad, just nothing special.

Git From Round Me
Back to the originals. This is a straight ahead down and dirty rocker. Depp does the verses but Alice does the choruses and end section, and it sounds great. So much seems to be going in places during the chorus with different sounds fighting to come to the front. Really like this one.

'Heroes'
It may be heresy. but I've never been a great fan of Bowie's voice (or much of his music), so it really doesn`t bother me that they cover this classic. Sure it's kinda pointless in many ways, as it's so similar to the original, but it's a decent cover. Depp does a very good job singing it I think (as he did live).

A Pitiful Beauty
Another interlude piece.. This one a brooding synth/guitar based effects thing. Slowly build up into...

New Threat
Really like this one. Another dirty rocker. Could almost have been on 'Paranormal', and would have been a standout if it was. Slide guitar solo from Perry. I don`t know, I just like it!

Mr. Spider
Certain sources said beforehand that this was THE Alice track on the album. It is... and it's close to brilliant as well. The classic Alice "horror" voice is there in just the right places, over a Floydish groove and the chorus awesome, if only it was a bit little longer. If Alice released a whole solo album of this quality it would be amazing. Perry just about gets away with his solo, but I think a souring Gilmour-esque solo would have lifted everything a lot. Just brilliant. Right down to Alice's creepy la la la ad-libs at the end (which is a little 'Wind Up Toy'-ish?).

We Gotta Rise
First off, yes, it's a rip off. Secondly thank god the fart joke they do live isn`t as obvious on the record! Whew.
It's a bit throwaway. Probably works okay as the final encore at a show, with everyone singing along, but it's a little disappointing as a song. Just a bit of fun I suppose. You also get a short middle section similar to 'I Love America' but I can live without it.

People Who Died
The third last cover, and again I have never heard of the original until the Vampires played it. Liked it live and like it on the record, although maybe longer then needed, just repeating all the verses again. Again Depp's vocal fits perfectly well. Possibly Perry's best solo (if it's him).

Congratulations
This is the real curve ball on the record. Alice, then Joe, then Tommy(!!!!), and finally Johnny, take turns reciting prose over acoustic backing.. each ending in "Congratulations". Very theatrical and deep, but not exactly something you're going to rock out to!! The words each guy speak could probably be analysed for years to come, especially Depp's after what he's been through in the last few years. A good way to close the album, as you couldn`t really follow it with anything!

So there you have it. A very good album over all with a few real stand out moments. It should be mentioned that the drums on this are head and shoulders above the U2 drummer on 'Paranormal', and the bass is also extremely good. Both add a lot to every song. I'm assuming it's Sobel and Wyse throughout (since found out much of the bass is Tommy!), and if it is they should be really proud, they really nail it.