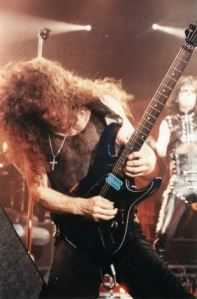 Vinnie is listed as one of the guest guitarist on 'Hey Stoopid' playing on 'Hurricane Years' and 'Dirty Dreams'. He also played on the 'Operation Rock'n'Roll' dates in the USA in 1992

Vinnie was discovered by Shrapnel Records executive Mike Varney, whose company speciallised in virtuoso instrumentalist, after he sent a dmeo tape in to Varney's 'Spotight' column in 'Guitar Player Magazine'. This lead to him appearing in a Pepsi commercial in 1985 although only his hands were seen.

Shrapnel released his first solo album 'Mind's Eye' in 1986, the first in a string of succesful and hightly acclaimed instrumental albums whihc showcased Moore's highly technical and fast playing and influenced the 'Shred' style of soloing.

Around 2004 Vinnie joined legendary UK rock band U.F.O. with whom he continued to tour and record along side his own solo career.