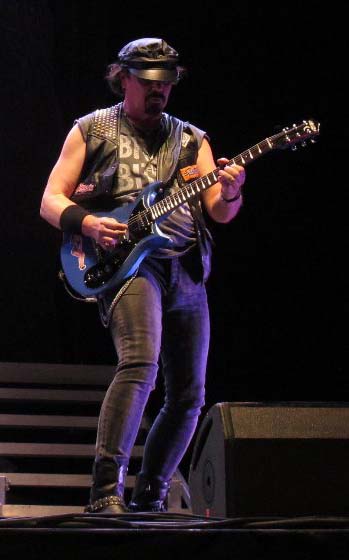 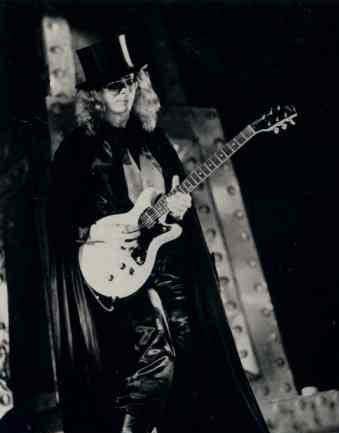 Steve 'The Deacon' Hunter was born in 1948 in Decatur, Illinois, and is an American guitarist best known for his collaborations with Lou Reed and Alice Cooper. He first played with Mitch Ryder's 'Detroit', beginning a long association with record producer Bob Ezrin. He played with Alice between 'Welcome To My Nightmare' and 'From The Inside' (but skipped the 1977 'Welcome To My Nightmare' tour and 1978 Lace and Whiskey' tour), both live and on album.

His first collaboration with Lou Reed was for the 'Berlin' album. He also played in the live band captured on Reed's live albums 'Rock 'n' Roll Animal and 'Lou Reed Live'. In 2006 Hunter returned to Lou Reed to take part in a new live version of the 'Berlin' album which was released on CD and DVD.

In 1973, Bob Ezrin brought him in to perform solos on the 'Billion Dollar Babies' album and when Alice Cooper became a solo artist, Hunter followed. He appeared on the 1975 album and live show 'Welcome to My Nightmare' alongside guitarist Dick Wagner, with whom Hunter had already formed a formidable guitar team while playing with Lou Reed. The 'Welcome To My Nightmare' live film features the pair on a celebrated guitar battle that formed part of the Alice Cooper 1975 live show.

In 1974, Steve played opening-half solo on Aerosmith's "Train Kept A Rollin" from 'Get Your Wings' although he was uncredited. In a February 2015 interview in Detroit Rock N Roll Magazine Hunter tells how it came about that he recorded the opening solo of Aerosmith's "Train Kept a Rollin": "Aerosmith was in Studio C of The Record Plant and I was doing work with Bob Ezrin in Studio A. I had a long wait between dubs and was waiting in the lobby. Jack Douglas popped his head out of Studio C and asked 'Hey, do you feel like playing?' I said sure, so I grabbed my guitar and went in. I had two run thru's, then Jack said 'great, that's it!' That turned out to be the opening solos on 'Train Kept A Rollin’'."

Other artists Hunter has worked with include Peter Gabriel (including 'Solsbury Hill'), David Lee Roth ('A Little Ain't Enough', 'Your Filthy Little Mouth') and Tracy Chapman. He also contributed music to, and is featured on, the soundtrack of the film 'The Rose', starring Bette Midler.

It 2011 it was announced that Hunter was working with Alice again on the 'Welcome 2 My Nightmare' (produced again by Ezrin) and would be joining the touring band from May of that year. He also filled Glen Buxton's role when the original Alice Cooper band reunited for the 2010 Christmas Pudding show in Phoenix, and for two shows around the band's induction into the 'Rock And Roll Hall of Fame' in March 2011. He went on to play extensively on the 'Welcome 2 My Nightmare' album and joined the band for the whole 'No More Mr Nice Guy 2011' world tour.

In early 2012 Steve announced he wouldn't be touring with Alice, partially due to his failing eyesight, but in the official release it was stated that he would continue to work with him in the studio. He appeared briefly on 'Paranormal' in 2017.

Since then Hunter has released several excellent guitar albums available through his website and other online retailers, and a 'live in the studio' DVD featuring legendary bassist Tony Levin. In 2018 he moved to Spain but continues to create new music. His latest album 'Before The Lights Go Out' appeared in 2018, the title referencing his failing eyesight which, despite various operations, is now almost completely gone. He no longer plays live but continues to work in his home studio with help from his wife Karen, herself a singer and musician.