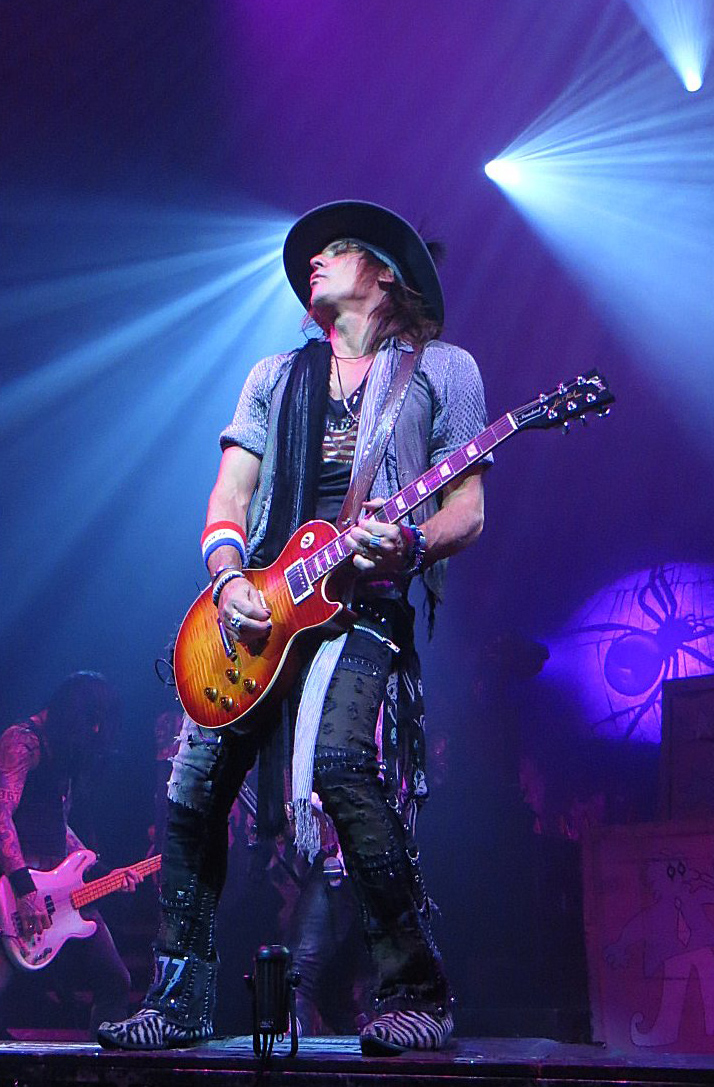 His first show with Alice was in 1996 at Sammy Hagar's Cabo Wabo club in Cabo St Lucas, which was filmed and recorded for 'A Fistful Of Alice', and he continued to play for the next 10 years (although missing most shows in 1998) becoming hugely popular with the fans for his friendly laid back attitude and willingness to hang out and meet people before and after shows. While working with Alice he released his first solo album under the name 'Roxie 77' called 'Peace, Love And Armageddon', an amazing album of rock/pop songs which proved his writing abilites beyond any doubt.

In 2006 Ryan announced he was stepping away from touring and moving to Sweden to spend more time with his young family:

"After much thought and deliberation, guitarist Ryan Roxie has decided to forgo his six-string gunslinger duties for Alice Cooper to concentrate on becoming a Shoe Cobbler.....namely, Swedish Clogs. Although Mr. Roxie has no interest in shoes, his fasination with wood is unparalled...... But seriously, Roxie is taking time to be with his family and would really like to be able to play for the Godfather of Shock Rock again in the future. The Alice Cooper Rock Show will remain to be one of the most fun and entertaining shows out there mainly for one reason: ALICE COOPER! Roxie is just happy that he's had the opportunity to play for the Man in Black (black eye make-up that is) on and off for the past 10 years. He'd also like to wish Alice, the Band, and the die-hard fans good golf, great poker, and the best rock n roll tour imaginable in 2006......."

He moved to Sweden (where he remains to this day) and put together a new band called 'happypill' with local musicians. 'happypill' became 'Roxie 77' to release 'Two Sides To Every Story', a double album featuring both electric and acoustic versions of each song, and which is every bit as good as his first album. The band played occasional shows, mainly around his new home town of Stockholm, and even opened for Alice at a few shows.

By late 2011 Roxie was privately expressing a wish to return to the Alice Cooper band, and so when a vacancy opened up friends and fans made it clear who we wanted! A facebook campaign was set up, and emails were sent out asking anyone who had a direct line to Alice to put in a good word, all without Ryan's direct involvement. It worked, and in early 2012 it was announced that Roxie was back with Alice were he belonged, and has remained there ever since.

2014 saw the release of the Roxie 77 'Ameriswede EP', six new songs with two different mixes of each, a Swedish mix and an American mix by Tommy Henriksen. Ryan was also a member of Swedish band 'Casablanca' who released two album, 'Apocalyptic Youth' (2011) and 'Riding a Back Swan' (2013), although he only occasionaly perform live with them due to Alice Cooper commitments.

Along with playing Alice Cooper shows Ryan endorses Gibson guitars and promotes them through guitar workshops around the world. He also hosts various online podcasts (the name changes!), radio shows, and all sorts of other things, so much it's often impossible to keep up with it all!

In May 2018 Ryan released the first album under his own name (as opposed to previous recordings under the Roxie 77 band name) called 'Imagine Your Reality'. Another brilliant batch of classic Roxie songs this one features Robin Zander of Cheap Trick on a cover of 'California Man', as well as his Cooper band mates Glen Sobel and Tommy Henriksen.

I make no secret of the fact I'm a HUGE Roxie fan. He is one of the most under-rated musicians around today and I highly recommend anything he releases to all Coop fans. All the core Roxie releases are available through his bandcamp site while 'Imagine Your Reality' is available through Amazon and any good music store.