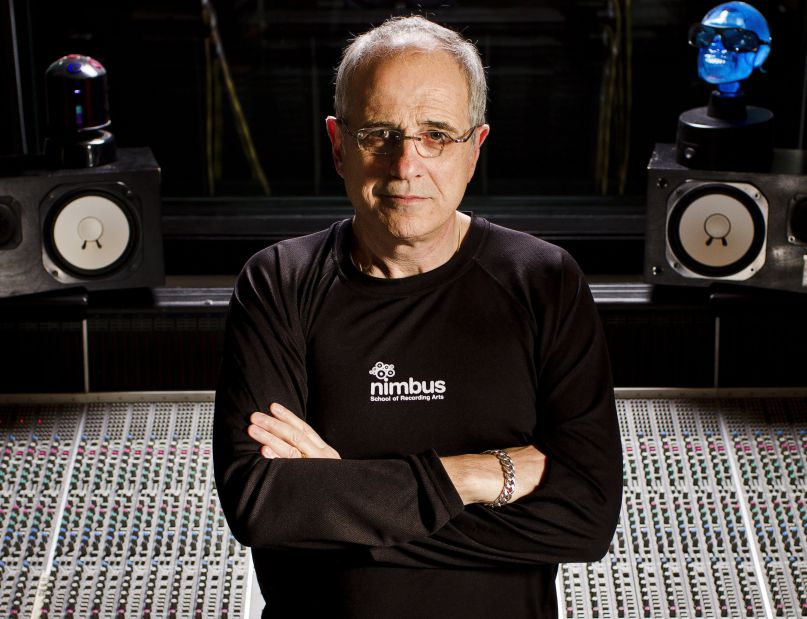 "Toronto" Bob Ezrin is one of the highest regarded producers in the music industry, who over his career has won innumerable awards for his work. It was Ezrin who was sent to see the fledgling 'Alice Cooper' after the band had been consistently petitioning his boss at Nimbus 9, Jack Richardson, to produce them. He was impressed with what he saw but Richardson still wasn't interested, telling his young apprentice if he thought they were that good he should do it himself. This started a long relationship that continues to this day.

Ezrin produced, co-wrote and performed on 'Love It To Death', 'Killer', 'School's Out', 'Billion Dollar Babies', 'Welcome To My Nightmare', 'Goes To Hell', 'Lace And Whiskey', 'Da Da', 'Welcome 2 My Nightmare' and 'Paranormal'. He is also credited as executive producer on 'Brutal Planet' and 'Dragontown'. Bob was a vital part of Cooper's success and he acted as a sixth member of the original band, writing and playing with them in the studio.

An amusing aside: In 2016 talentless rapper Kanye West took offence to an article Ezrin wrote in 'The Lefsetz Letter' – a music industry email circular - in which he pointed out unlike other creators in his genre he didn't "open up new avenues of discourse like 'NWA', or introduce the world to a new art form like 'Grandmaster Flash', or even meaningfully and memorably address social issues through his music like 'Marshall', 'Macklemore' and 'Kendrick'. West's songwriting, Ezrin wrote, "was sophomoric at best. Instead, Kanye’s greatest achievements have been in the form of excessive behaviour, egomaniacal tantrums and tasteless grandstanding,".
In return West launched a "egomanical tantrum" against Ezrin on twitter, demonstrating not only is lack of decorum, but his complete lack of knowledge as well. "Has anyone ever head of Bob Ezrin" he wrote of the internationally renowned, award winning producer. "Your kids are ashamed of their dad… Sorry for speaking about kids… but could you imagine if you were Bob Ezrin’s kids… I'm so sorry for them… I will send them free Yeezys [Apparently West endorsed shoes] to make up for the embarrassment that you have caused your family!" he went on.
In response Ezrin wondered where his kid's free shoes were.

"The Coopers were my first ever project. I was hired by Nimbus 9 (a production company formed in Canada) basically as a management consultant, not as a producer -- I did stuff like 'Coke' jingles, never anything like a group. Anyway I went up to the office one day and everyone was in hysterics. The cover of 'Easy Action' (Alice Cooper's second album) was laying around -- and we were all really straight guys y'know -- I mean, I was never really that much into rock 'n' roll. I had arrived at it more or less through things like Simon and Garfunkel. Anyway we put on the album and just broke up laughing. We didn't know if Alice Cooper was a guy or a chick and eventually it became a standing joke around the office that if anyone messed up that week we'd be forced to go and work with Alice Cooper."

A persistent Alice Cooper road manager, commissioned by manager Shep Gordon to get Jack Richardson -- another Nimbus producer -- for Cooper's future recordings put the heat on Ezrin in order to get him down to see the band.

"I wasn't interested in the least. I hated the record, but this guy made my life such hell with his persistence that I reckoned that I'd go and see 'em just so they'd get off my back. So I went to meet them at Toronto. I walked into their hotel and ....these five guys -- everyone of 'em is a faggot, everyone of 'em and they're all after me. I can tell. The road manager is a faggot, the roadies are faggots. I'm sitting there in my blue jeans, with my short-hair, shaking inside, man, and here's this guy Alice Cooper -- his hair is stringy and down to his shoulders, his pants are so tight I can actually see see his penis through the crotch -- they're slit at the side. He's talking with a slight lisp .... I just could not handle it. Anyway they said, "We're great and we want a producer". Finally we parted company and I was like so relieved. It was such a horrendous experience -- I was such a straight guy before all this started -- and I just forgot."

More harassment by the Cooper minions forced Ezrin to witness the band at Max's Kansas City.

"After the gig I went backstage. I didn't know why, but I just thought the show had been great, and I went up to the band and said, "I think you guys can make hit records", and they said, "That's good -- we think you can too". It was a nice punk start. Actually I was still pretty scared because I still believed they were all faggots. It was just a riff someone had decided on as an image, but I'd just had those album covers to go on before so l didn't know better. Anyway I moved to Detroit into a shoddy motel -- hated Detroit -- and the guys just crowded into the bedroom in the morning. We started to talk and they played me tapes. The tapes were horrible. And I mean, horrible! They said, "We like this sound. can we get it in the studio". I almost threw up."

"The first thing we ever did was 'Eighteen'. Their original arrangement was eight minutes long and had a lot of excess bullshit. You see, my job was first to transform stage arrangements into record arrangements, which was something they'd never bothered to consider. Ultimately it was a great rush to hear the 2 min. 38 secs. version. I knew it would be a hit from then on."

'Eighteen' actually did become a hit, reaching No. 18 in the American charts, and is still arguably Cooper's best single to date, sharing that accolade with 'Schools Out'. 'Love it To Death', the album that followed, was both their first critical and financial success. The Coopers' days as an esoteric, bizarro trash delight were over, and Ezrin was most definitely their mentor in this respect. From then on, his work in the studio became more complex and demanding: Even session guitarists were often added to beef up the Coopers' sound.

"I think that's what a producer's job is -- to decide what should be done and what shouldn't be used and if the group can't cut it you should supply it for them. That's the role I've always played for the Coopers and I've always been very careful to stick with that identity."

From a radio special:

"..there was a heavy blue smoke hanging in the air, and everywhere there people pushing and shouting. Then band came on and Alice opened the show on his hands and knees with a hammer in his hand and was pounding it on the stage, the song was 'Sun Arise'... It was one of the most powerful images I've seen in my life.."
(Bob Ezrin on seeing the band perform live for the first time)

"Traditionally, record companies hired producers to deliver viable money-making products within a budgeted deadline. As a successful artist gained clout by proving they had stay-power, they could get away with calling the shots, but by that point, their schedule got crammed with interviews and live shows, which diminished their chances to write. They used to say a that a band had five years to write their first album and two weeks for the second.

As for 'Pretties For You', from beginning to end, five people created every note of it. Ian Underwood spent the second (and final) night, of our all-night moonlight sessions trying to salvage the carnage of extreme leakage due to recording without any baffles, which Zappa insisted on. I was honoured to work with him, and I admired his intentions but cringed at the results. Despite that, I love that album for its unbridled attempt to do something that had never been done before. I wanted to push much further in that direction but for the band, it came down to choosing that or food.

'Easy Action' was a rush job to fulfil a contractual obligation. If we had had another month to write, it would have come closer to the coherency of 'Love It To Death'. David Briggs had to deal with an extremely budgeted deadline, and wasn't too sure who would be paying him. He much preferred Neil Young's style of music to ours, so we had to slap it together with a producer who appeared to be so depressed about our music that he didn't really want to be in the same room with us. Considering all that, and how unprepared we were, the album has its moments.

Alice Cooper liked the sound of 'The Guess Who's singles, so on our behalf, Joe Greenberg and Shep Gordon hounded Jack Richardson until he sent his kid apprentice to hear us. This time around, we got Warner Bros. to allot time for Ezrin to guide us in our preproduction to insure our music was ready when we walked into the studio. Not much of Ezrin's input had to do with chord changes, that was all Michael and the band. Ezrin's input had to do with taking everything that was vague and making it distinct-say if one guitar was playing a minor scale against a major. Things that live volume often forgave but studio separation magnified to a hellish degree. One of the many things history has overlooked about our recording team is that Jack Richardson was there for the entirety of the 'Love It To Death' and 'Killer' sessions and advised Ezrin by phone for all our subsequent albums. That's not to detract from Ezrin's talent, we didn't call him the 'Boy Wonder' for nothing.

In my opinion, trying to divey up who did what always gets all ass-whacky, and ultimately distracts from the music. The magical illusion of the art is that the realities are suspended in the final results, so just enjoy it."