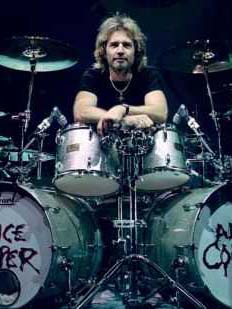 Eric Singer played drums with Gary Moore, 'Black Sabbath' and 'Badlands' before hooking up with Alice on the second part of the 'Trash' Tour replacing Jonathon Mover. He joined in time to appear in teh =video for 'Only My Heart Talkin'' and remain through the first leg of the 'Hey Stoopid' tour leaving just before the 'Wayne's World' performance to join 'Kiss'. Singer had performed on Paul Stanley's solo Tour two years earlier and when Kiss drummer Eric Carr became ill he was asked to stand in. With Kiss he made his recording debut on 'Revenge'. Carr sadly never recovered and Singer was recuited as his replacement. In 1996 he performed on Kiss' 'Carnival Of Souls' albyum, but the record wasn't released for some years. In 1996 Kiss decided to reform their original line up leaving Eric out in the cold.

Eric rejoined Alice on the 1998 'Rock and Roll Carnival' tour replacing Jimmy Degrasso who had been invited to join Megadeth. He left again on the 6th September 1998 to join up with Brian May's band which began touring on September 12th. Eric rejoined Alice for the 1999 tour and played on the 'Brutal Planet' album and tour, the 'Dragontown' tour, the 'Bare Bones' tour, 'Eyes Of Alice Cooper' album and tour and 'Along Came A Spider' album and that years tour. Post 2001 he also played with Kiss, splitting his time between the two bands as Peter Criss joined, left, rejoined and finally left the band for the final time.

In 2009 He became Kiss' permanent drummer and appeared on their 'Sonic Boom' and all future release.

"Of all the artists I've ever worked with, Alice is the one that asked me most frequently. I've done more shows with him than with Kiss. I think I have a very good relationship with him, as well professionally as personally. He's a terribly nice guy, almost never gets upset. Easy to deal with, easy to work with. He knows what he wants, but he allows everyone in the band to do their thing. On stage he wants me to be Eric Singer, a performer. Whenever I want to turn my drumsticks around, I can, and if I want to add some show, I can. He wants everyone in the band to feel good. What I really appreciate is that Alice keeps asking me, even when I was busy elsewhere, whenever he needs a drummer. So I never let him down. He's always been good to me and he deserves to be treated respectfully."
(French Magazine interview, 2002) 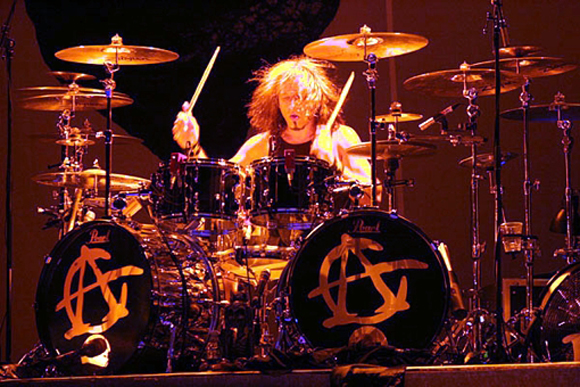