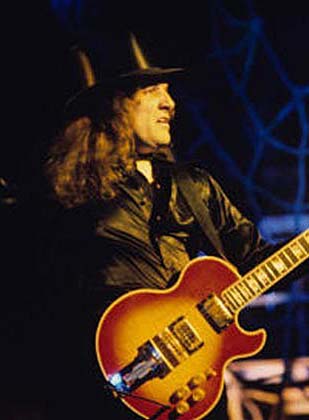 Richard 'Dick' Wagner was one of Alice's most notable sidemen. He first turns up, via Bob Ezrin, on the 'School's Out' album playing, at least, on 'My Stars', before being credited on 'Billion Dollar Babies' and in fact co-wrote 'I Love The Dead' although the band bought him out. He played on 'Muscle Of Love' and then co-wrote and performed with Alice from 'Welcome To My Nightmare' through to 'From The Inside'. He later turned up on 'Zipper Catches Skin', 'Da Da', co-wrote 'Might As Well Be On Mars' for the 'Hey Stoopid' album, and 'Something To Remember Me By' on 'Welcome 2 My Nightmare'. Apparently he also co-wrote some material for 'The Last Temptation' which didn't make the final album.

In 2011 Dick released his autobiography 'Not Only Women Bleed', a collection of anecdotes more then a straight biography, as an ebook. A hardback version followed shortly after.

On July 30th 2014 it was announced that Dick Wagner had passed away following a series of heart and lung problems.

After the original band and Bob Ezrin, Wagner was probably the single most important musician to have worked with Alice. His sense of melody and superb guitar playing were essential to Alice's survival without the original group.

"In 1975, (Alice's) management asked me to put together a new band. So I asked all the guys who I played with in Lou Reed's Rock and Roll Animal band - Steve (Hunter), Prakash John, and Pentti Glan - to become Alice Cooper's new band. They brought us in to make a change in the development of the Cooper sound - make more complicated, better songs. They wanted a tighter band."
(Dick Wagner, Vintage Guitar, February 1998)

Wagner's earlier bands, 'Ursa Major' and 'Frost' (circa 1970), recorded a few albums, one produced by Bob Ezrin. One of the 'Ursa Major' tracks, 'Stage Door Queen', features the riffs that later became 'Wish you were here' on 'Goes to Hell'. He also co-wrote 'Execution Day' on Meatloaf's 'Blind Before I Stop' album.

In 2007 Wagner moved to Phoenix and spent some time with Alice Cooper writing songs.

From the Richard Wagner home page:

There are few American musical careers that have demonstrated more diversity or creativity in the last quarter century than that of Richard Allen Wagner. More often than not, he has been the creative spark that has ignited the careers of other more visible pop/rock artists. Writing hit songs, producing artists in the studio or demonstrating his virtuosity as master guitarist, he commands the attention of the entire music industry.

Wagner's musical gifts seem boundless. The public first took notice of his talent in 1964, when he formed the popular band, The Bossmen, whose songs like "Baby Boy" were radio favourites in Michigan. Soon Wagner was writing and producing for many other Michigan bands and the Wagner name was prominent on local record labels. In the late sixties, as Wagner's work became more complex and featured a harder edge, he formed The FROST, recording three albums and drawing record crowds to hear songs like "Mystery Man" and "Rock N' Roll Music."

With hopes of reaching larger audiences, he moved to New York to form Ursa Major, a majestic rock trio whose one album on RCA was a major influence on the 1970's metal rock scene. Wagner's talent captured the attention of Lou Reed and he was asked to play lead guitar on "Rock N' Roll Animal." This recording was acclaimed by Rolling Stone Magazine, describing it as a "live set featuring the remarkably skilful band led by Steve Hunter and Dick Wagner."

The melodic and soaring guitar work of Wagner garnered him work with the best in music during the 1970s and 1980s as he performed or wrote for such diverse range of artists as Aerosmith, Hall & Oates, Air Supply, Kiss, Burton Cummings, Roberta Flack and Steve Perry. None of these collaborations were to equal Wagner's lengthy alliance with rocker Alice Cooper. As lead guitarist and music director, Richard Wagner helped Cooper become a mainstream artist by co-writing Cooper's biggest chart hits, 'Only Women Bleed', 'I Never Cry', 'You and Me', and 'How You Gonna See Me Now'.

With Wagner's studio walls lined with gold and platinum awards, he approached the eighties by writing music inspired by the observant eye of a world travelled artist. His music became more personal and spiritual. From this came the remarkable song "Remember The Child," that painfully illustrates the ills of child abuse. Originally commissioned for a Child Abuse Coalition in Texas, noted author/lecturer John Bradshaw discovered the song and chose it as his theme for the Emmy-nominated PBS series "Homecoming." It has since become the anthem for tens of thousands who have been scarred by child abuse.

2002: Dick is currently settled down back home in Saginaw, Detroit where he has a recording studio and publishing company, The Wagner Music Group. He is still helping a lot of local bands get started in the music business, writing music, producing, recording and playing clubs around the Michigan area.