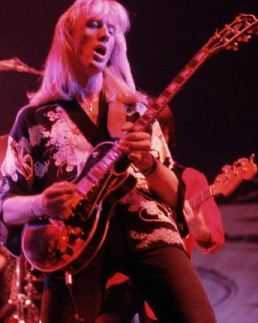 Johnstone was born in Edinburgh, Scotland and is most famous for being Elton John's longtime guitarist, a fact mentioned by Alice in the 'Strange Case Of Alice Cooper' video when Johnstone starts playing 'Saturday Night's Alright For Fighting'. He played with Alice on the 'From The Inside' album and tour and the 'Flush The Fashion' album.

"Davey Johnstone was one of those great players who could play anything. I think if I were going to pick two guitar players that I was going to keep for the rest of my life, it would be Richie Sambora and Davey Johnstone. Davey's one of the great road guys of all time. He will probably still be on the road thirty years from now. [He was!]"