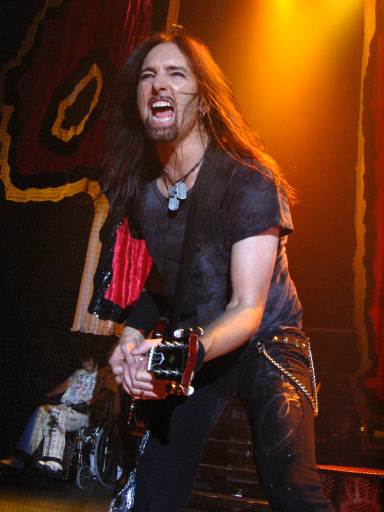 Damon Rogers Johnson (Born July 13 1964), Ex-Brother Kane/John Waites guitarist, took over from Eric Dover for the last part of the 'Eyes Of Alice Cooper' 2004 tour when Eric was unavailable, and remained throughout the 'Dirty Diamonds' album and 2005 tour.

In March 2009 it was announced Damon would be returning to Alice replacing Jason Hook (who ironically replaced Damon originally). He stayed with the band until August 2011, becoming a much loved member of the touring band. He left to reactive his own band 'Brother Cane', and to play with his all-time favourite group 'Thin Lizzy' who later became the excellent 'Black Star Riders'. He has however continued to make the occasional guest appearances with Alice.
In 2018 Damon announced he was leaving Black Star Riders to concentrate on his solo career, although he would still join Thin Lizzy when they play their occasional shows.

Background information based on Damon's biography from DamonJohnson.com 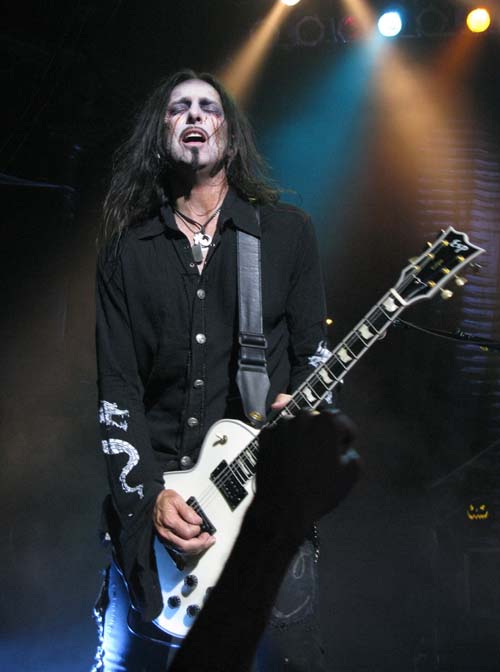 Damon Johnson's musical career has been an exercise in persistence, pure and simple. Heralded in his early 20's as one of the most fierce guitarists in the Southeastern U.S., he slugged it out in no less than six different bar bands in his home state of Alabama between 1984 and 1990. It was that year that Damon formed the four piece rock band, 'Chyld', which would have a revolving door of lead singers. The band acquired a development deal with Virgin Records in November of that year, still not sure who would fill the shoes of "frontman". On a trip to Birmingham to check the band's progress, a record company rep heard Damon sing a few cover songs during one of their "3 sets a night-5 nights a week" show and convinced him to become the lead vocalist and frontman. A couple of additional member changes, Damon's first batch of songs as a lyricist (many of which were written with his newly discovered songwriting partner, Marti Frederiksen) and a name change to 'Brother Cane' would find the band in the Record Plant in Los Angeles in the summer of '92. A year later Virgin released the self titled, 'Brother Cane', which would yield three Top 10 rock tracks (including the #1 single, "Got No Shame") and high profile opening tour slots for Aerosmith, Robert Plant, and Lynyrd Skynyrd.

Damon and the band toured for 14 months and the album sold an impressive 250,000 copies. In 1995 Brother Cane delivered their sophomore effort, 'Seeds', which brought yet another #1 rock track, 'And Fools Shine On' (which was also the theme song for the horror film, Halloween 6), and Damon's "boyhood dream gig" of opening for rock legends Van Halen. Damon became fast friends with singer Sammy Hagar, and made songwriting and guitar playing contributions to Sammy's first post-Van Halen solo album, 'Marching To Mars'.

1998 saw the release of Brother Cane's third album, 'Wishpool', which Damon says, "..was certainly my most personal statement as a lyricist and the body of work that I am most proud of." Yet again, the band had a #1 single at rock radio, 'I Lie in the Bed I Make', and toured the country from March until November of 1998, but after 6 years of hard touring and an unsatisfactory yield for the time and energy invested in 'Brother Cane', the band decided to take an "indefinite hiatus". Damon says, "I haven't shut the door completely on 'Brother Cane'. I love that band and the people I played with, but it got to be such a struggle to have any sense of unity into one musical direction."

Shifting gears from being totally immersed in 'Brother Cane', March of 2000 saw the release of Damon's first all acoustic solo album, 'Dust'. "Playing some acoustic shows gave me a chance to showcase some new compositions along with several songs from the 'Brother Cane' catalog." 'Dust' contains many great original songs, and excellent renditions of Thin Lizzy's 'Borderline' and Merle Haggard's 'Workin' Man Blues'. Damon supported the release of the disc with several live performances alongside gifted vocalist and friend Mike Farris ('Screamin' Cheetah Wheelies'), and the two continue to perform dates together annually.

Early 2000 saw Damon spend a brief stint with the 'Damn Yankees' alongside Ted Nugent, Jack Blades, Tommy Shaw, and Michael Cartelone. In March of 2001, Damon was "incredibly flattered" to have legendary Fleetwood Mac vocalist Stevie Nicks record one of his compositions, 'Everyday' ( co-written with John Shanks). It would turn out to be the first single from her solo album, 'Trouble In Shangrila'. Later that same year, Damon would lend a hand as lead guitarist for the great British rock vocalist John Waite. "John is incredible! What a blast to listen to that guy sing and get to write some songs with him."

Early 2002 saw the release of the debut album from 'Slave To The System', a side-project of Damon's with Queensryche's Kelly Gray and Scott Rockenfield . The album was written, recorded, and mixed over a three week period in Seattle and features incredible rock songs, heavy in guitar. The band has done some touring and plans to release more discs in the future. In August of 2002, Damon's distinctive guitar work was featured on country/pop superstar Faith Hills' smash hit single 'Cry, a track produced by his old friend Marti Frederiksen.

In 2003 Damon formed a new band, 'Red Halo'. Based out of Birmingham, AL, the band features Jason Marchant and Deacon Ledbetter on guitars (formerly of 'Virgos Merlot'), longtime friend Billy Wilkes on drums, and Damon handling the lead vocals and bass guitar. "Yeah, it's a little strange to some people," Damon laughs, "but I love playing bass in this band. Jason and Ted are great guitarists and are always coming up with great riffs that inspire me as a writer." The band will release it's debut EP in the summer of 2003, 'Dead Man's Vitamin' but then seemd to fade away.

2003 also saw the opening of Damon's own recording studio, 'Double Dragon'. Located just outside of Birmingham, the studio provides other artists the opportunity to work with Damon in a creative atmosphere (The 'Red Halo' EP was recorded in it's entirety at Double Dragon Studios).

2007 sees Damon in a new light with his new country rock band 'Whiskey Falls' who's debut album was been a big success.

In 2010 Damon released 'Release' a mostly acoustic solo album which features Alice on a remake of 'Generation Landslide'.

In 2016 Damon released the 'Echo' EP and launched 'The Damon Johnson Band' for low key solo shows, normally around the southern states of the US. In 2017 he released a solo live album called 'Birmingham Tonight.

In 2018 Damon released a new studio album 'Memoirs of an Uprising'.