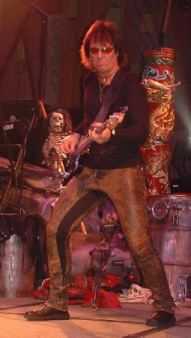 Chuck Wright began his professional career with Giuffria in 1984 before joining Quiet Riot for their 'QR III' album. Over the next 10 years Chuck worked with an impressive list of artists inclucing Gregg Allman, Ted Nugent, Doro Pesch, Cheap Trick, Magdallan and House Of Lords (both with Ken Mary). He joined Alice's touring band in 2002 for the second leg of the 'Descent into Dragontown' tour.

After Alice Chuck continued to play with a wide asortment of artists and continues to tour with Quiet Riot.