Golf Monster: A Rock 'n' Roller's 12 Steps to Becoming a Golf Addict
By Alice Cooper with Keith And Kent Zimmerman
Review By SickthingsUK 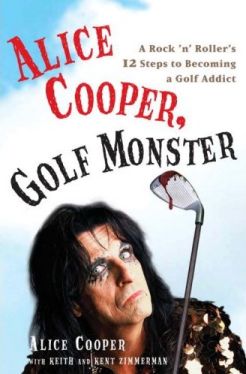 It's been a long time since the last Alice Cooper autobiography, 'Me Alice' and a lot has happened since then. Unfortunately this book isn`t going to tell you much about it. Don't get me wrong, it's an enjoyable read and for the casual fan it will hold stories they haven't heard before, but for the hardcore looking for insight into Alice, his music and his life, it really doesn't tell you very much.

To start with what you get is a book with two sides. The first is the general biographical content, starting with Alice's life as a child in Detroit and following through the ACG years to 1975 but in the most part in little detail. This music side of the book then seems to almost rush through most of the rest of his career with virtually no mention of albums post-'The Last Temptation' at all. You get stories about Alice and other celebrities (many of which have been retold in numerous interviews over the years) but very little about band members. Bob Ezrin and Shep Gordon get a lot of coverage but the original band get very little while other arguably very important people and events aren`t even mentioned. On top of that the version of events retold in this book are often at odds with what other people present tell, and often at odds with what Alice use to say. An example being the bands first introduction to Shep Gordon which has changed beyond all recognition from what the rest of the band have always stated, and Alice's own version in 'Me, Alice', since the addition of Hendrix to the story a few years ago.

Obviously with such a long and event packed career there was no way everything could be included. However the lack of detail, and some factual errors, are disappointing to someone who already knows most of what is in the book. Many of the stories just don't ring true, or at least sound like they have been embellished from the basic facts.

The other half of the book is the much feared (by some) "golf Addict" chapters where Alice talks about his addiction to the game, why he finds it so fascinating and how it changed his life. In some ways these are possibly the most insightful parts of the book and they do include music related material as well as the sort of thing only a golfer would be interested in. What I do find very clever is the way the golf sections and the music sections are differentiated by using a different typeface, so the reader can, if they wish, simply skip past these sections if they aren't interested. This is a great idea although I would certainly recommend the reader to read the complete book the first time as they do contain some good stories.

If reading the above you think I didn't enjoy reading the book, you would be incorrect. It is a fun read, but I think you have to approach it not as a definitive, authoritative biography of a legend, but more as an extended interview with Alice discussing whatever comes to mind in very lose chronological order.

There are also many photos (with a colour section in the middle) throughout the book some of which are rare and some maybe never even published before. However even here the logic of where some photos are placed in the narrative seems inconsistent as they photo chosen doesn't have any connection, even period-wise, to the text it's against.

Also worth a mention is that there is also an abridged AUDIO version of the book, read by Alice himself. I have only heard a short clip of this at the time of writing but it sounds like it could be very enjoyable.

I think the bottom line here is that 'Golf Monster' is an enjoyable read and a good starter for anyone who wants to know more about Alice, the man. However the hardcore fans I think will finish the book feeling a little disappointed at the lack of new information or insight into Alice's work.