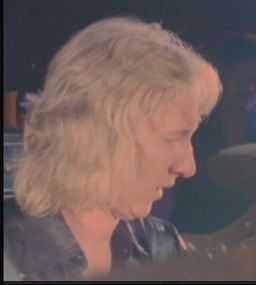 Pentti 'Whitey' Glan played drums with Alice from 'Welcome To My Nightmare' to the 'Madhouse Rocks' tour except for the second part of the 'King Of The Silver Screen' tour. He had previously performed with 'The Five Rogues', 'Bush' ('70s version), 'Mandela' and in Lou Reed's band during the 'Berlin', 'Rock And Roll Animal' and 'Live' period and did session work for Bob Ezrin and Nimbus 9 productions.

Whitey was spotted playing with Canadian David Wilcox at a small festival just outside Hamilton, 1984 or 1985. He appears on Wilcox's album 'Bad Reputation'.

Whitey passed away in November 2017.

Born in Finland on July 8, 1946, Glan moved to Toronto and, by 1965, was in a band called the Rogues, who changed their name to Mandala and had a 1968 Top 10 hit in their native country with "Loveitis." He later spent time with a group called 'Bush', which opened up for 'Steppenwolf' and 'Three Dog Night' in the early '70s, which worked out nicely for Glan. One of 'Bush's songs, 'I Can Hear You Calling', which Glan co-wrote, was the b-side to 'Three Dog Night's 'Joy to the World'. 'Steppenwolf' frontman John Kay then used his talents on a pair of solo albums. 1972's 'Forgotten Songs and Unsung Heroes' and 'My Sportin' Life' a year later.

Then, Lou Reed hired him and Bush's bassist, Prakash John, to play at a concert at Howard Stein's Academy of Music in New York in late 1973. Highlights from that show were released as 'Rock'n'Roll Animal'. After it became a hit, a second record from that night, Lou Reed Live, came out in 1975. In between, he played on much of Reed's 'Sally Can't Dance'.

Reed's band for that show, which consisted of Glan, John, Dick Wagner and Steve Hunter (guitars), then went on to work for Cooper, who was looking for new musicians after the dissolution of the original Alice Cooper band. That first solo record was 'Welcome to My Nightmare', which reached No. 5 on the Billboard Albums chart. Although he didn't work with Cooper in the studio again, he was often part of his touring band in the '70s, and was featured on 'The Alice Cooper Show', a live album from 1977.

He also played the drummer in 'The Rose', the 1979 Bette Midler movie that was loosely based on the life of Janis Joplin.