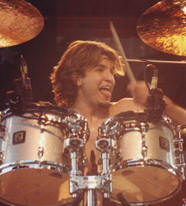 Tommy joined Alice from Ted Nugents band in 2004 for the second 'Eyes of Alice Cooper' tour replacing Eric Singer who returned to Kiss. He also deputised for Singer for a couple of dates on the 'Dirty Diamonds' tour and also played on the album, although Singer is pictured on the cover. He left Alice to join Rob Zombie's band for a while and then moved on to Ozzy Osbournes band. From there he played drums live with the reformed Black Sabbath, as well as continuing to play Ozzy's solo shows.

Early Biography from www.tommyclufetos.com which now seems to be gone:

Tommy, born December 30, 1979 in Detroit, MI has been living drums since he got his first pair of sticks at age 7. At age 11 he was playing clubs and concerts 5 nights a week in his father's band. All while trying to stay awake in his junior high school classes. Tommy recollects on those early invaluable experiences. "It was the greatest training ground, one night I would play a wedding, and the next night I would be playing 'Johnny B. Goode' behind the actual Chuck Berry. I played in every situation imaginable."

Also, at the age of 14 Tommy began a year long touring engagement with 60's soulful singing icons "Little Anthony And The Imperials." Next, Tommy began playing with Detroit rock legend "Mitch Ryder And The Detroit Wheels," touring across the country. By Age 18 he was a seasoned pro with hundreds & hundreds of gigs under his belt.

And if there is one thing he has learned, it's that playing is not the only ingredient to a successful working career in music. Tommy adds, "It's the showing up on time, getting along with people, having an upbeat attitude, and you must maintain a strong work ethic. You have to be willing to go to any length to be the best you can be."

In 2002, Tommy played on his critically acclaimed album "Craveman" with the 'Craveman' tour following. He is also featured on Ted's first DVD release 'Full Bluntal Nugity'.