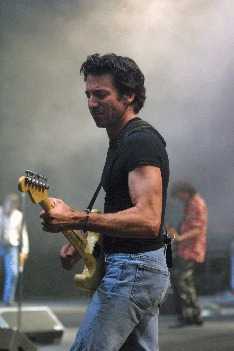 Stef played on the 'Hey Stoopid' album and tour and during 'The Last Temptation' period. He also played at the New Year 1998 shows.

Stef has had an eclectic career including stints with Pablo Cruise, Sheila E, Berlin, Michael Bolton, and Y&T. .He ws invited to join Alice Cooper after being recommended to Alice by Joe Satriani. After leaving Alice in 1995 he hooked up with Vasco Rossi and Y&T as well as performing on many recording sessions for other artists. In 2005 he turned up as part of Huey Louis And The News where he remains, along continued work with Vasco Rossi.

Stef has also released a string of solo records and has his own band 'Stef Buurns League' who released an album, 'Roots And Wings' in 2014.