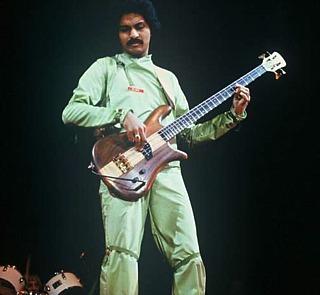 Prakash John played bass with Alice between 'Welcome To My Nightmare' and 'From The Inside', and on 'Da Da' although he apparently doesn't recall doing any sessions for the album, so It's likely his performances came form older sessions. He had previously performed with 'Bush' ('70s version), 'Mandela' and in Lou Reeds band during the 'Berlin' period ('Berlin', Rock and Roll Animal' and 'Live') and did session work for Bob Ezrin and Nimbus 9 productions. He also worked on George Clinton`s 'America Eats Its Young'.

Prakash can be seen in the movie 'Blues Brothers 2000' during the revival band scene.

After leaving Alice he returned to Toronto to form 'The Lincolns', Canada's best R&B band, who in 1988 played at Wayne Gretzky's wedding. They released two albums, long out of print, that consisting mainly of R&B standards. They continue to play around the Toronto area where he also books and plays in his son Jordan John's band.