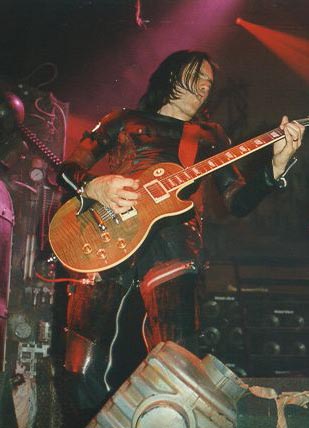 Pete was guitarist on the 'Trash' tour and the 'Hey Stoopid' European tour, including a short cameo in the famous 'Waynes World' movie scene. During the tour he met up with support band, The Almighty, who he joined for two albums. He wanted to do the Summer '96 tour but, unfortunately, it clashed with the Almighty's final shows.

"My roommate was going to the Guitar Institute of Technology and he just asked me if I wanted to go as well. I did a year at GIT and then hung around in L.A. after that. The Alice Cooper thing came about when a bass player friend of mine was going to audition for an Alice video. You know, just miming and all that, and he asked me if I wanted to go along. It turns out that I got the gig miming bass guitar for the 'Poison' video. That's how I got my foot in the door with Alice. He called me and asked me to audition for the touring band and I got the gig!"

He rejoined Alice on the European 'Rock And Roll Carnival' tour in 1998 and continued onto the 1999 tour. He also performed on the first leg of the 'Brutal Planet' tour and can be seen on the 'Brutally Live' video and DVD. In 2002 he rejoined Alice when Ryan Roxie was unable to tour on the second leg of the 'Decent into Dragontown' tour.

Apart from his work with The Almighty Pete is also featured on Sack Trick's '(Music from the) Mystery Rabbits' which is an album from ex-Bruce Dickinson's Skunkworks trio of Chris Dale (Atom Seed, Balance of Power Bassist), Alex Dickson (Gun, Robbie Williams Guitarist) and Alex Elena (Drums).

April 2002: Pete had a new band called 'The Shakers' which feature Ex-Judas Priest drummer Les Binks, Ex-Poormouth Guitar/vocalist Tom Lundy and Bassist/vocalist Eamonn Doyle. They played mainly covers and could be seen gigging around the south of England. They split a few years later. In 2006 The Almighty reformed and played shows in the UK for the next couple of years.

Nowadays Pete lives in the UK and teaches music at the Academy of Contemporary Music in Guildford, Surrey.