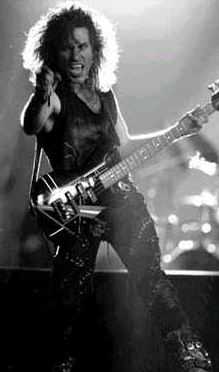 Kip was the bassist on the 'Constrictor' album and 'Nightmare Returns' tour, and the 'Raise Your Fist And Yell' album on which he wrote 'Gail'. He left Alice to form his own band 'Winger', which also featured Alice bandmate Paul Taylor and future Alice guitarist Reb Beach. Alice suggested the name 'Winger' after they initially considered 'Sahara'.

Winger had moderate success in the US with their first self-titled album and the hit single 'Seventeen', and followed it up with the even more successful 'In The Heart Of The Young' in 1990. The band continued for a few more years before splitting up to pursue other projects.

Kip released four solo albums before he reunited 'Winger' in 2006 to record new music and tour. He also wrote music for a ballet (Winger is a qualified ballet dancer!) called 'Ghosts' and was nominated for the 'Isadora Duncan Award for Excellence in Music'. He also wrote the four part 'Conversations with Nijinsky', a recording of which was released by the San Francisco Ballet Orchestra and topped the Billboard 'traditional classical' charts.

In 2011 Kip popped up on Alice's 'Welcome 2 My Nightmare', much of which was recorded in his home town of Nashville. He continues to play and record with 'Winger'.