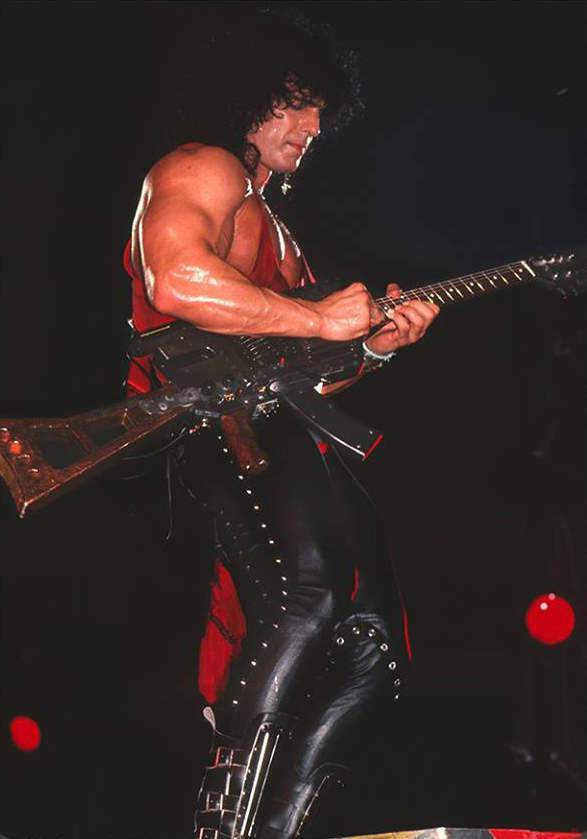 Kane Roberts, or 'Rambo' as many people called him, was the guitarist who played on 'Constrictor' and 'Raise Your Fist And Yell' and their respective tours. He is the man responsible for Alice's 'metal' years in the late '80s as he co-wrote nearly every track from those albums. Just by being on stage he was a part of the show, with his huge physic and rocket shooting guitars.

AAround the same time as 'Raise Your Fist', Kane released his first self-titled solo album which featured Alice's lyrics on 'Full Pull'. He then guested on 'Trash', playing guitar on Bed Of Nails' before releasing a second solo album, 'Saints And Sinners'.

In around 1999 Kane formed 'Phoenix Down' who released two albums entitled 'Under A Wild Sky' and 'New Place Now'. He recorded his third solo album in 2004 called 'Touched' but this has yet to be released.

Around 2002 he co-wrote a track with Alice called `Hexed In Texas` which so far hasn`t seen the light of day.

He also played on the Bob Ezrin produced 'Count Three And Pray' album by 'Berlin', and a Rod Stewart album. He help out on backing vocals on Steve Vai's 'Sex And Religion' album. He also co-wrote 'Take It Off' with Paul Stanley and Bob Ezrin which appeared on Kiss' 'Revenge' album.

Aftr that Kane disappeared from music and focused his creativity on the world of computer games. He created three CD ROMS, most notably "The Lords Of Tantrazz" on Atlantean Interactive. A dark and gore-filled sci-fi adventure, it features a voice performance by Alice as the voice of the ultimate evil - "The Hunger". Thegame was released around 1996 but wasn't easy to find.

A "new" album was released in 2012 called 'Unsung Radio'.This was a double CD which featured a reissue of the first Phoenix Down album plus a selection of demos and unreleased songs.

In 2017 Kane announced he was working on a new album, and posted photos of himself and Alice Cooper in the studio recording for the album. The album was finally released as 'The New Normal' in January 2019 and features Alice on 'Beginning Of The End'.