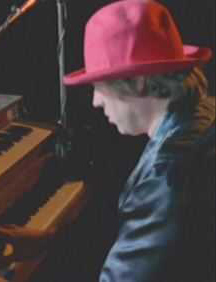 Chirowski played keyboards with Alice from 'Welcome To My Nightmare' album and tour, and also appeared on the 'Lace And Whiskey' album. German born, but based in Canada, he had previously performed with 'Crowbar' ('Oh What a Feeling, What a Rush'), 'The Five Rogues', and 'Mandela' as well as session work for Bob Ezrin and Nimbus 9 productions.

"(My father)...fell in love with one of his groupies (twenty something years ago), and was never seen again! Apparently he remarried some rich American chick with three kids of her own and he just didn't have time for his Canadian daughter, gave up music and became a "lumber jack" in the boonies of ..............Michigan?!"
(Chirowski Canadian Daughter, 24th Sept 2001)