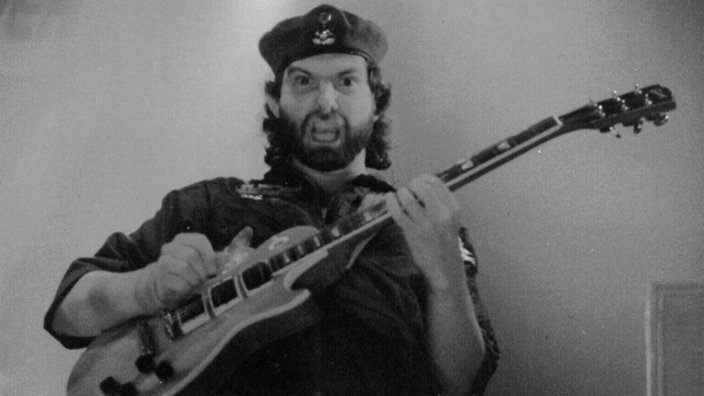 John Nitzinger was a guitarist on the 'Special Forces' tour and played and wrote for the 'Zipper Catches Skin' album.

John Nitzinger and Texas Rock. You can't separate the two. Since the age of seven when he wrote and recorded his first song in his hometown of Fort Worth, the sound of music coming out of the "Lone Star State" began to have an identity all its own. Nitzinger, along with Freddie King and others helped shape the signature sound of Texas rock and blues.

In the 60's at "The Cellar" and later at the legendary "Mother Blues" in Dallas "Johnny," as he was known then, began to shape the sound that is identified today as "Texas Rock and Roll." Capitol Records wasted little time in signing John to a multi-album deal. They thought so highly of Johns' talent that they spent more money packaging his first release than they had ever spent on one of their artists. Two of John's early hits, "Louisiana Cockfight" and "L.A. Texas Boy" became classics and his skill at writing "hit" songs did not go unnoticed.

While continuing his solo career he showed his versatility by writing about half of the songs on five albums recorded and released by the legendary band "Bloodrock." John was rewarded with a gold album for his work. Other artists began to take notice when Nitzinger performed at the "Mar Y Sol Festival" in Puerto Rico with the likes of Santana, Grand Funk Railroad, B.B. King, Emerson Lake & Palmer, and many others. John brought down the house with the introduction of his classic hit "Texas Blues-Jellyroll." When Atlantic Records released a compilation of songs from that now famous festival, "Texas Blues - Jellyroll" was the first cut on side one and became the albums initial single release. His third solo album "Live Better Electrically" was released on 20th Century Records then being led by the legendary record executive Russ Regan. Russ knew good writing when he heard it and two songs from that album, "Are You With Me" and "Yellow Dog" became "breakout" hits. Ever looking for a challenge John was intrigued by an offer from Hall Of Fame drummer Carl Palmer(Emerson,Lake and Palmer). Carl was starting a new band and invited John to join him as his guitar player and song writer. The band " PM " soon released it's first album on the Areola-Europe label. "1 P.M." which preceeded a European tour and featured the single "Dynamite" and a couple of other songs written by Nitzinger.

Alice Cooper then sought out John to write and play guitar for him. John joined Alice Cooper on the "Special Forces" international and USA tours. Soon after the "Special Forces" tours, the album, "Zipper Catches Skin" on Warner Bros. Records was released featuring another Nitzinger written hit "I Like Girls" which has had great success in Europe and Asia [Seriously?!?].

Recently, John has released another album with his band. The new material is "smokin" according to "Harder Beat Magazine". The new CD entitled "Didja Miss Me" will be in stores soon. Well, for all of the awards and notoriety and after having been inducted into the "Texas Tornadoes" Hall of Fame, you'd think that John would welcome a chance to slow down. Think Again. He's already written the tunes for his next album and a greatest hits project is on the drawing board.