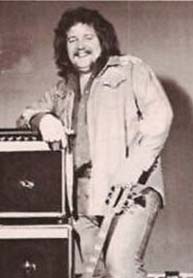 Jefferson "Jeff" Kewley was the guitarist who played on the 'School's Out For Summer 1978' ('King Of The Silver Screen' part 2) tour replacing Dick Wagner. He can also be heard on 'From The Inside'.

Kewley also played the character Baron Krelve in the 'Good To See You Again, Alice Cooper' movie (the sketches version).

He played with Neil Diamond on the album 'Hot August Night' and worked with the 'Grateful Dead' before working with Alice.