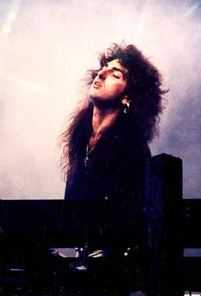 Derek Sherinian was Alice's keyboard player between the 'Trash' tour in 1989 and the 1995 South American 'Monsters Of Rock' shows. He also performed with Alice at special the New Year shows in both 1996 and 1997. After Paul Taylor left the band early on the US 1998 'Rock And Roll Carnival' tour, Derek stepped in to help out during a break in his 'Dream Theater' schedule.

Before working with Alice Cooper Derek attended the 'Berkeley School Of Music' with Al Pitrelli (his roommate who recommended him to Alice) and he played offstage on the Kiss 'Revenge' tour on the recommendation of Eric Singer.

Since leaving the Cooper band Sherinian has gone on to become a world respected keyboardist after working with Progressive Metal superstars 'Dream Theater' between 1994 and 1998 which whom he released three records. He also released a series of solo projects including 'Planet X', which he turned into an ongoing band releasing four more excellent albums.

In 2001 he began touring with Billy Idol until in 2010 when he joined new band 'Black Country Communion', a "supergroup" also featuring 'Deep Purple' legend Glenn Hughes, blues star Joe Bonamassa and Jason Bonham, so of 'Led Zeppelin's John Bonham.. The band toured worldwide and released three studios albums. In 2012 Derek worked on a collaboration with his former Dream Theater bandmate Mike Portnoy, along with virtuosos Billy Sheehan on bass and Tony MacAlpine on guitars, under the name 'PSMS'. This led to the formation of another new band Portnoy called 'Sons Of Apollo' who released their frst album in 2017 called 'Psychotic Symphony'.

The cover of Sherinian's 'Planet X' album features a quote by Alice:

"Derek Sherinian will be at least one chapter in my book when I write my autobiography. He is arrogance personified. He is the Caligula of the keyboards. He is the pompous king of pop. He was born with the rock star charisma. Reeking of self-esteem, he walked into our first rehearsal for the 'Trash' tour and flawlessly auditioned by playing every classic Bob Ezrin keyboard part to the note. Ten years later and thousands of exchanged poker chips later, the two of us have probably broken even. He is the only one to survive the wrath of the Alice Cooper Tour Poker Marathon. Derek is always on time, in tune, and ready to play...music too."
Alice Cooper

Alice on Derek from from 'Keyboard Magazine', January 1998:

What was it about Derek that made you want to hire him?

Alice: There are a few people in this world who were born rock stars, and he is one. He came out of the womb with his boots on. Derek understands pompous.

And his pomposity didn't rub you the wrong way?

Alice: No, not at all. I look for that in people. He understands how to be pompous at the right time. That's what real rock stars have got to learn: when to be pompous. He knew exactly how to stick his nose up when I'd introduce him. He was the Emperor Caligula of rock. But we didn't expect him to have the charisma he had. Especially offstage. He's a lot of fun,and a good poker player.

What about his keyboard abilities?

Alice: Derek's great. He's an asset to any band he's in. I mean, the thing about him is that he can play anything.

What's your favorite memory of Derek from past tours?