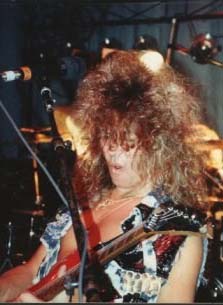 Dan Wexler played guitar and was signed by Capitol Records while he was still in high school in Scottsdale, Arizona, USA. The name of his band at that time was 'The School Boys'. After some personnel changes, the band re-formed under the name 'Icon'. Dan's father was the former owner of a theatre-in-the-round in the Phoenix area. It is possible that Alice met Dan Wexler at a local club in Phoenix, AZ, as 'Icon' and 'The Schoolboys' played often and Alice had been sighted at bars in the Phoenix metro area. Alice guests on the 'Icon's 1989 album 'Right Between The Eyes' on the tracks 'Holy Man's War' and 'Two For The Road'. Dan appears on 'The Last Temptation' and 'Is Anyone Home' from 'A Fistful Of Alice'.