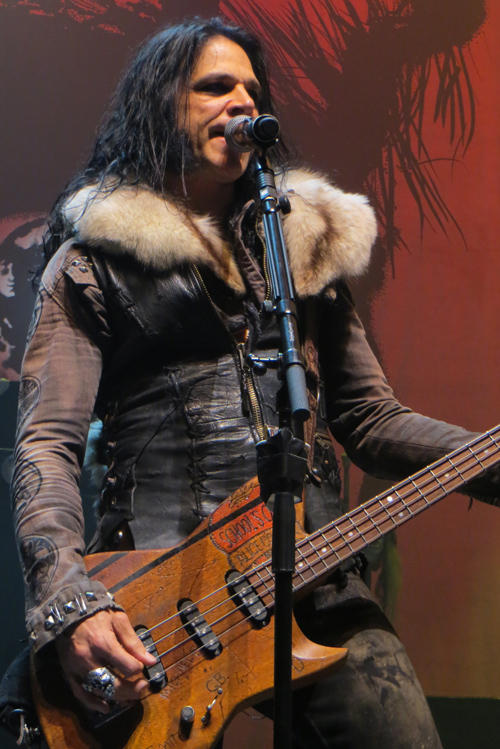 Chuck Garric is one of the longest serving musicians to be part of Alice's solo band. He first played bass on the on May 3rd 2003 at the 'Summer Music Mania 2003' in the Coors Amphitheater in Chula Vista, California which was transmitted on US TV. From there he has performed on every Alice Cooper tour to this day, even taking lead vocals when the band perform 'I Love The Dead' or 'Ace Of Spades' ('Raise The Dead' tour). Alice has even discribed Chuck as his 'right hand man'. Chuck also records the 'Nights With Alice Cooper' radio show for Alice while on the road.

Before joining Alice, Chuck had played with Turd (who released two records: 'Turd Up The Volume' and 'Turdville U.S.A'), The Druts, L.A. Guns, Dio and Lynch Mob, and in 2005 toured as part of Union with Bob Kulick and John Corabi. Union also perform as The Eric Singer Project when Eric is available to play.

Chuck also records and performs had his own band called 'Beasto Blanco', a collaboration with guitarist Chris Latham and Calico Cooper. The band's debut album 'Live Fast, Die Loud' was released in October 2013 via RatPak records and was produced by Tommy Henriksen.
In 2016 they released their second self-titled album, which included a cover of 'Feed My Frankenstein', in 2018 they followed that with a live album, 'Live from Berlin', and in May 2019 'We Are'was released. Beasto Blanco tour frequently when schedules permit and have played shows across the US and Europe. Early shows also featured Tiffiny Lowe on keyboards and backing vocals.