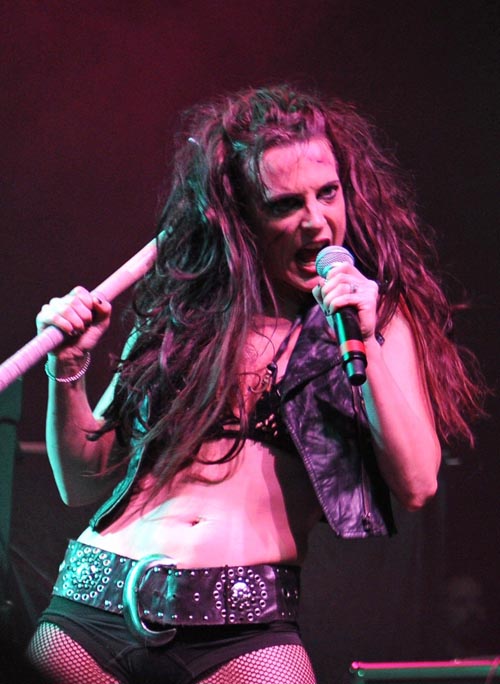 Calico is Alice's eldest child. She really came to fan attention when she joined the 'Brutal Planet' tour in 2000 following in her mother's footsteps by playing various parts in the show including the Nurse, 'Cold Ethyl', the whipgirl, and "Britney Spears", even being introduced on stage by Alice as 'My own little nightmare'. She continued her roles onto the 'Dragontown', 'Bare Bones', 'Eyes oF Alice Cooper', 'Dirty Diamonds' and 'Psychodrama' tours, also provided a few backing vocals to albums and live performances.

Calico is a professional actress. Her first movie appearance that I've found is in a horror film called 'Bloodline: The Legend of El Charro', released in September 2004, in which she plays 'Mistress Of Salvation'. However her role in it is very small and has no dialogue so it's a "blink and you'll miss her" thing. Apparently it's so short it didn't even qualify her for her 'Screen Actors Guild' card, which was one of the reasons she did it. She has a slightly larger roll in 'Scarlet Frys Junkfood Horrorfest', a shlock D-movie, and since then has appeared in film, TV and as a model. Notably she also appeared in 'Suck' with her father.

By 2010 Calico had also moved into stand up comedy and improv around the LA area to substaintial success and has been working with The Groundlings and Upright Citizens, as well as making appearances with shock band The Genetorturers (where she met Tiffany Lowe, who replaced her in Alice's shows).

Calico also performed for 'Anti Sweden Jeans' and in March 2011 traveled to Hell, Norway to appear live in their fashion show production.

Since 2012 following a guest appearance on Chuck Garric's 'Beasto Blanco' album 'Live Fast... Die Loud' Calico has become a permanent member of the group, co-fronting the band on stage with Chuck. They have so far released two studio albums and a live record, with a new studio album due in 2018. They tour in the US and Europe as schedules allow and are an excellent live act well worth catching.

In October 2015 Calico married Jed Williams at a ceremony in Hawaii.